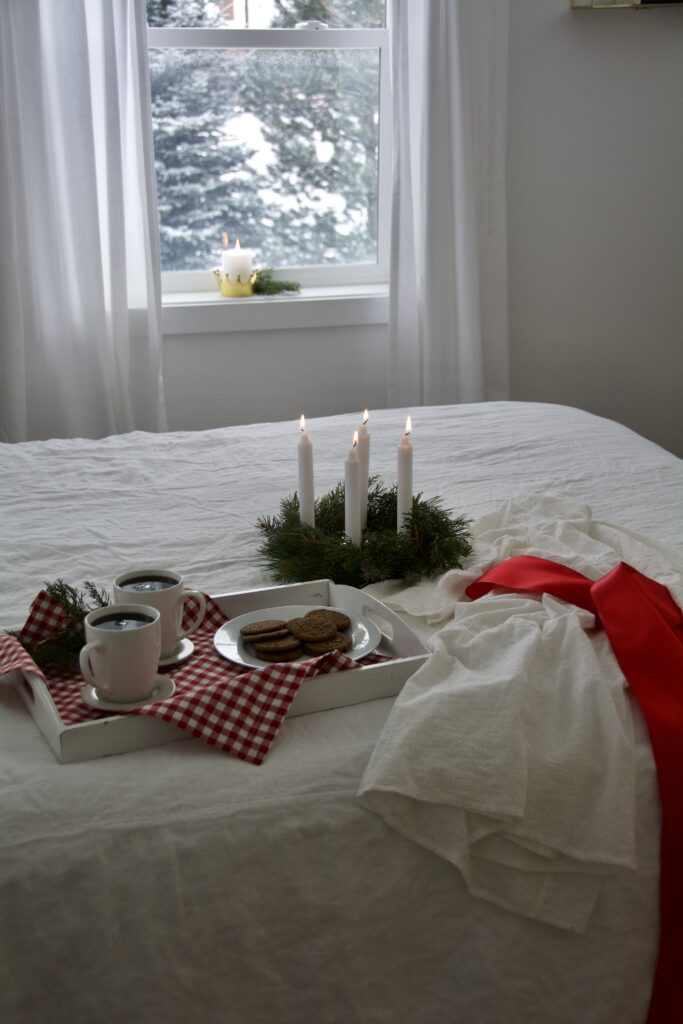 A beautiful way to celebrate the spirit of the Christmas season, a season of love, peace and tolerance is to introduce your children to celebrations taking place in different cultures around the world. Learning of new histories and stories, tasting festive foods, and accepting foreign traditions opens hearts and minds and strengthens family bonds while merrymaking together.

One such fest, most popularly celebrated in Scandinavia and Italy, is Saint Lucia Day. St. Lucia is a traditional Christian feast day held on December 13th. It is known as a Celebration of Light and marks the beginning of the Christmas season. It originally coincided with the Winter Solstice, the shortest day of the year. Lucia, meaning light in Italian, was said to be beautiful with light shining from her eyes fueled by her love for Christ. She emanated both a physical and spiritual radiance about her.

The story of Saint Lucia, an early-4th-century virgin martyr, is both wonderful and tragic. Lucia was raised to believe in Christ and at a young age dedicated her life to God and serving the poor. In Italy, the year 283 A.D. was a time of great political and social unrest. The emperor of Rome issued demands against those practicing the Christian religion. It is said that Lucia, pardoned because of her family’s royal status, visited Christians hiding in catacombs under the city of Syracuse, Sicily to avoid persecution. She wore a wreath of candles on her head to light her way and free her hands enabling her to carry as much food and water as she was able to attend to those forced to live in desperate conditions. Eventually, Lucia was caught and put to death.

Every year on December 13th, children take part in commemorating Saint Lucia with a Celebration of Light amidst the darkest time of the year. In towns and schools around Sweden children dress up to walk in reverent church processions. Girls and boys wear long white gowns as a symbol of purity with girls tying a red sash about the waist or shoulders symbolizing the blood of St. Lucia’s martyrdom and wearing a wreath or crown of candles on the head. Boys wear white cone-shaped hats decorated with gold stars and carry attendant candles. It is a long-standing ceremonial tribute to this saintly young woman.

Here are some ideas of ways to celebrate Saint Lucia Day in your home, sharing Lucia’s story. In Swedish homes on December 13th, children awaken early and dress in white nightgowns with the eldest daughter in the family, when she is old enough, tying a red sash around her waist, placing a candle wreath on her head and leading the sibling procession to their darkened parents bedroom. They present a breakfast tray of lussekatter (bright saffron buns), pepparkakor (gingersnaps) and cups of steaming coffee making a thoughtful contribution to the family’s Christmastide traditions. Music plays an important part in Saint Lucia traditions as well with classical Christmas carols such as Oh Come All Ye Faithful and Silent Night to be sung or played in the background adding to the reverence and calming spirit of your family’s observance of Saint Lucia Day. You may even want to add this Swedish Saint Lucia playlist to your festivities.

Bringing with it a source of light and goodness, Saint Lucia Day is a valuable ancient and foreign celebration worth learning about and introducing into your family’s Christmas holiday traditions.